At the Tomb, we witnessed two changing of the guards, and a ceremony wherein the President of Finland presented a wreath from the people of Finland. We were impressed by the precision of the guards, with the uniforms and equipment, and the procedures the sentries followed. 21 steps he marches, stops, faces the tomb for 21 seconds, turns and marches 21 steps to the end, to repeat the procedure. Very impressive. (21 steps represent an honor much as does the 21 gun salute.)

At the bus, Dave treated me to an ice cream bar, and would not take a nickel from me, saying that the whole trip was to be cost-free for my day. What a guy!

We had just entered the bus when very strong wind came up and brought rain. We had done most of the important memorials, and now the guides took us on a bus tour of Washington, pointing out more of the memorials and important buildings.  All this touring with our police escort took us on a merry chase through traffic and stoplights in the heart of D.C. I got a kick out of watching traffic pulled over to let our convoy have the right of way. (I worried that one of those cars on the side streets would not realize that there were three buses in the group and would pull out too soon, but that didn't happen. I guess the people of Washington are used to having important people, such as us, touring the downtown streets.)

We drove back across the Potomac to the Women's Memorial adjacent to the Arlington National Cemetery. It was still raining, but Honor Flight was prepared, as always, with plastic ponchos and umbrellas for the short walk to the museum building. It is an interesting memorial, but, although well done, I did not feel it was as dynamic as some others. Different displays in the curved hallway depict numerous jobs done by the women who served. It was interesting to see the changes made in the clothing over the years. The styles ran from skirts and blouses, to male style trousers, which seems a lot more practical than the earlier garb.

We left this area about 4 pm and headed north toward the Baltimore Airport. Traffic was heavy, and we did not have the open road as we did in the morning. On the way, another surprise. Mail Call. Honor Flight had solicited mail from friends, and others, brought on board by the guardians, to be passed out while enroute. It was such fun reading all the great letters from many many folks and from school kids who sent messages thanking the vets for their service. Some of them drew pictures in color, for our enjoyment. Honor Flight

Following was a brief walk to the Lincoln Memorial. As the vet, I was not allowed to use the stairs under the rules of the Honor Flight, so we took the elevator to the level of the Lincoln sculpture. It is a lot larger than I would have thought, not having been that close to the actual figure before. Son Dan was everywhere taking pictures and getting the right backgrounds. We walked around the building to the back side where we could see the Memorial Bridge and the Potomac River.

Clouds were getting increasingly dark, with cool winds coming in from the north. We saw a group of bicyclists coming over the bridge toward us, and we suspect that they probably got caught in the nasty weather coming in.

Veteran Bob Yocom traveled to Washington, DC, on May 14, 2016, and later sent us this description of his experience. 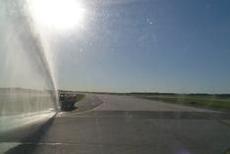 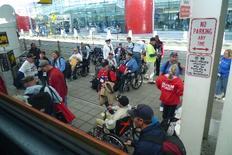 My day began at 4:45 am, when I left for Port Columbus, and a flight scheduled for 7 am. At the airport, I was met at the curb by one of the 75 some Honor Flight volunteers in yellow shirts, who took me to the assembly area. I was given a lapel badge and an Honor Flight T-shirt which I put on over my other shirt. I met my "guardian" here and after some instructions, we proceeded to the gate area where our Southwest Airplane waited for us. We were offered food snacks and drinks. At 6:30 am the loading process began. The many wheel chairs made the process of loading very difficult. Each guardian took the person he supervised to the plane door and walked the vet to his seat, while airline personnel carried the wheelchairs down the outside stairs to load them in the hold of the aircraft. (These chairs are heavy and cumbersome, making loading a big operation.) (Luckily, I don't use one.) 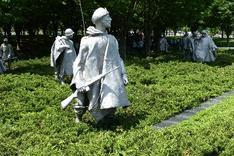 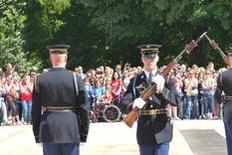 I finally arrived back at the apartment about 11:30 that night, tired, but elated by a wonderful trip that I could not ever have dreamed up on my own. It was such a great experience, without a single flaw the whole day. The glow lasted many days after that. I have talked to others who have made the trip, and we all agree that the trip cannot be adequately described in words.  You have to experience the trip in person to appreciate all that Honor Flight did for their vets. All vets should experience this wonderful trip.

had contacted my brother-in-law with a request to ask others in the family for letters. He had notified my family, his family, and even a cousin, who all sent letters. My guardian said that I had the heaviest pack of all that he passed out to his group.

We arrived at the Baltimore Airport at 6 pm, and were escorted through security once again.

While waiting in the boarding area for our plane, we were served a light lunch, provided by Honor flight. And it was welcome after such a busy day. 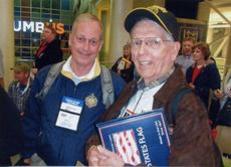 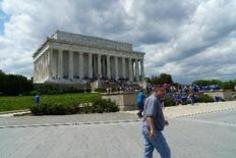 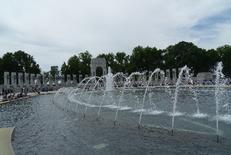 After touchdown in Baltimore, as the plane was approaching the gate, we were met by two fire trucks which gave the plane a water salute. Impressive.

Deplaning was a chore in reverse of that at Columbus, in getting wheel chairs out of the airplane hold and back to their users and moving through the airport to the waiting buses.

Our trip to Washington from the Baltimore Airport was escorted by three police cars with red lights and sirens screaming the whole way. That was exciting! We were important enough for an escort. 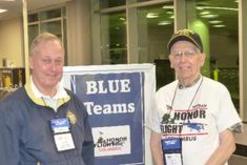 After loading the buses again, we went to the other end of the Mall, where we visited the Korean War Memorial. This Honor Flight took mainly vets of the Korean era, and the Korean Memorial was the focus of our trip.

It is a site located just outside a grove of trees and near the Lincoln Memorial. It consists of 19 stainless steel soldier figures in a formation as they would form in the field of war, and a black granite wall, etched with photographs of figures of the different branches

After loading the buses, we drove back into the heart of Washington, accompanied by our police escort, and we parked near the WWII Memorial. We found the Ohio column, witnessed a flag folding, partially supervised by two of our own vets leading six Navy personnel. We viewed the wall of 4,048 gold stars, each representing one hundred of the 405,000 U.S. American Military personnel killed in WWII.

My guardian presented me with a medallion commemorating the Korean Conflict. It is beautiful and is proudly displayed at home. One side shows "Honor Flight Columbus" and the reverse side shows "Dedicated to Honoring Our veterans. Korea." And a small map of Korea.

We arrived at Port Columbus about 9:30 pm. After everyone was off the plane, some gifts for us were handed out, including a beautiful U.S. flag. We filed out into the main lobby of the airport, to the din of about 500 people there who came out to welcome us back. I probably shook 150 hands that were outstretched along the path. It was a bit overwhelming, and there were many vets with tears in the eyes. A greeter with a mike announced each name, which was broadcast over the P.A. system in the airport. A bagpiper played for us. A squad of citizens greeted us in colonial army dress. And a short ceremony followed.

He insisted on seeing me to my car, riding out to my parking place, and making sure I got into the car safely, and then he returned to his parking lot to drive home to Bowling Green, still that night.

of service that fought in the war. Although invisible to us that day because of the crowds of people milling about in front of the granite wall, it is said that if one stands in a certain spot to be able to see a reflection of the sculptures, it appears to double the field, making the figures seem to be 38 figures, symbolic of the 38th parallel in Korea. A reflecting pool opposite the granite wall imposes a calm over the area.  Etched in the granite blocks at the edge of the pool are the statistics of personnel killed, wounded, captured, and missing in action. It is significant that the number of U.S. Forces compared to the U.N. Forces ran a ratio of about 1 U.S. to 10 of the United Nations. A very high percentage of U.N. troops were made up by South Koreans who fought for their own freedom. The U.S. sent the second highest number of military personnel to South Korea.

A note about my guardian. He is a retired computer science professor from Bowling Green University, and has been doing guardianship work for several years. He had made three trips this year already and was a wealth of information all day. I couldn't have had a better companion. After several emails in the days before the flight, we had already established a bond. The guardians pay their own way for everything without reimbursement.

​Once in the air, more food snacks and drinks were offered.

At the Tomb of the Unknown Soldier we were met by large crowds, which forced our buses to park farther from the tomb than they usually do. It was a long hike for those pushing wheelchairs, as it was generally up hill.