Eaven Eubanks shakes the hand of John Kraner, the veteran that Teays Valley West Middle School is sponsoring for an Honor Flight trip this fall.. 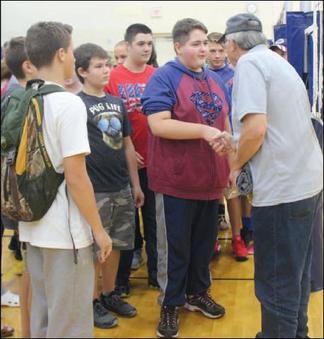 Students at Teays Valley West Middle School sponsored veteran John Kraner on the October 21, 2017 trip. The students also plan to sponsor more vets in 2018. This article from the October 14-15 issue of the Circleville Herald describes the project.​ 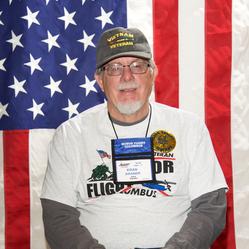 CIRCLEVILLE— Students at Teays Valley West Middle School have come together to raise funds to send a deserving veteran on the Honor Flight to
Washington D.C.

Honor Flight is a non-profit company that sends World War II and Vietnam Veterans to Washington for a day to visit the national memorials, all at no cost to the veterans.

“We saw an article in May in The Herald about a couple guys who went on the Honor Flight and we kept that paper because near Veterans Day we honor veterans, and we saved it thinking we could use it as a display,” said Marty Bethel, library aid at West Middle School. “Then, this fall, I pulled the paper out and I looked up Honor Flight Columbus, and it says, ‘sponsor a veteran,’ and that’s what we decided to do.”

The veteran they’re sending this year is John Kraner who was selected to receive the sponsorship by Honor Flight. Kraner was honored at West Middle School Friday with a ceremony and a standing ovation from the students and staff that nearly brought him to tears.

"You don't get a lot of compliments and to come in and hear this," said Kraner, an Army veteran who served on the ground in Vietnam. "I'm not use to it. The men and women who serve today, I can't thank them enough. It was awesome and I'll remember this for the rest of my lift."

Bethel said it costs $500 to send one veteran on the Honor Flight, so they put each grade level together to try to raise funds.

“Each grade level has done something. One did a hat day; one did a red, white, and blue day,” she said. “A dollar at a time, and with pocket change, it came together.”

With the students pitching in over the last two weeks and a few outside donations, Bethel said they’ll be able to do even more than their initial goal of sending one veteran along.

“With a few outside donations we’re up to over $1,700,” she said. “So we’re going to send three more vets in April because we anticipate to be able to  raise enough money to do that.”

Bethel said holding the fundraiser was a way to make the kids aware of Honor Flight and to honor the veterans in a way that can’t be done locally, since the national memorials are in Washington D.C.

“Most of the kids hadn’t even heard of Honor Flight,” she said. “We’re always trying to find ways to honor veterans and give them the respect they deserve. We thought this was a good way to do that and really understand the sacrifices they’ve made to do that.”