When the Southwest 737 lifts up from the runway on September 9, Honor Flight Columbus volunteers will mark a major milestone. Aboard will be the 5,000th Senior Veteran from central Ohio to go on this no-cost trip of Honor, Celebration and Sharing. 16 World War II, 52 Korean War, 15 Vietnam and 3 who were in during both the Korean and Vietnam Wars are scheduled for this 84th trip. All made possible by the hard work of dedicated volunteers.

Veterans from World War II, the Korean War and the Vietnam War are on the ten-year-old organization’s log book. “When we started,” says Jim Downing, HFC president,” our goal was to get as many World War II veterans as we could to see their recently opened memorial. Thanks to the generosity of the people, organizations, and corporations of central Ohio, we are continuing with those service members and have moved into two more wars.” The backlog of applications for veterans to fly now stands at just over 1,000. The primary sponsor of this flight is Vance Outdoors.

On these day-long trips, Senior Veterans fly to Baltimore and convoy in three motor coaches into Washington D.C. They visit the World War II, Korean War, Vietnam War memorials on the Mall, a change of the guard at the Tomb of the Unknowns at Arlington National Cemetery and see the Air Force, Navy and Marine memorials built to honor veterans. To enable the vets to see so much in a single day, the convoy is escorted by the National Parks Police.

Included in the overall total of 5,000 are 31 veterans of any period who were terminally ill.

Honor Flight Columbus is the first Hub in the Honor Flight Network which now has more than 131 Hubs in 45 states. HFC is the third Hub to surpass the milestone 5,000 Senior Veterans. 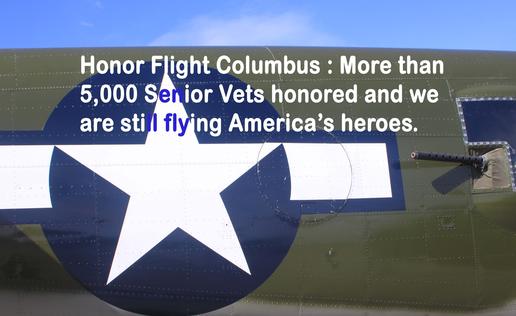